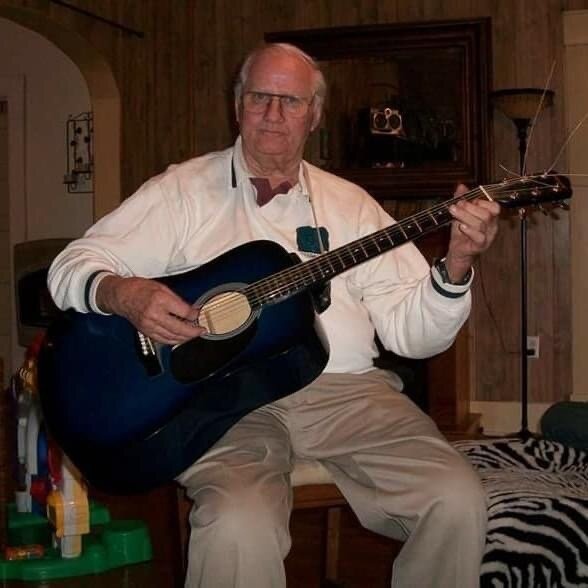 Billy Latham Zook Billy Zook of Bloomfield, Missouri, son of the late Willie A. and Parisea L. Latham Zook, was born in East Prairie, Missouri on November 23, 1929, and passed away in Sikeston, Missouri at the Sikeston Convalescent Center on September 21, 2022, at the age of 92. Billy grew up in East Prairie and worked many years in construction. On November 12, 1949, Billy married Shirley E. Holman. They lived on a farm in Glen Allen, Missouri for many years until Shirley's passing in September of 2004, after which Billy moved to Bloomfield. He was of the Baptist Faith, loved his family, and loved playing music on guitar. He leaves behind one son, Randy (Regina) Zook of Bloomfield; two daughters, Ruth Zook and Sherry Harris both of Bloomfield; one brother, Chalvas Zook of Wappapello, Missouri; four sisters, Delphia Houghland of Columbia, Illinois, Dathol Barksdale and Linda Ivy both of Sikeston, Missouri, and Brenda Watson of Poplar Bluff, Missouri; ten grandchildren, seventeen great-grandchildren, and three great-great-grandchildren. Many other family and friends will miss his smile and humor. He was preceded in death by one daughter Vicki Zook; one son who died at birth; three brothers, Elvon Zook, Gary Zook, and Dewey Zook; two sisters, Laverta Bonta and Carolyn Shemwell. Visitation will be on Sunday, September 25, 2022 from 12:00 noon to 2:00 P.M. at the Watkins and Sons Chapel in Bloomfield, Missouri. Funeral services will be held the same day as visitation at 2:00 P.M at the Watkins and Sons Chapel in Bloomfield with Zach Zook of Glen Allen, Missouri officiating. Interment will follow in Bloomfield Cemetery in Bloomfield, Missouri with Watkins and Sons Funeral Service of Bloomfield, Missouri in charge of arrangements. Watkins & Sons Funeral Service www.watkinsfuneralhome.com
To order memorial trees or send flowers to the family in memory of Billy Latham Zook, please visit our flower store.