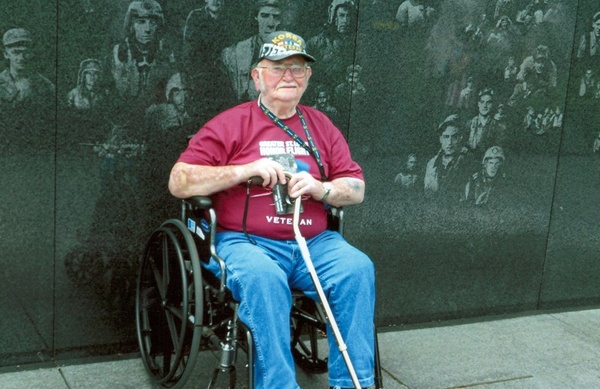 Luther Felix Davis, son of the late George Washington Davis and Erma Bell Woods Davis, was born in Essex, Missouri on April 16, 1930, and passed away at the Puxico Nursing and Rehab., Puxico, Missouri on May 8, 2021, at the age of 91. Luther was veteran of the US Army having served during the WWll War and Korea War after coming home from service he went to work as a maintenance man at a Lead Smelter company. He lived in Essex, Bonne Terre, and Festus, Missouri areas. Luther Married Emma Jean Buff on May 7, 1971 and she precedes him in death. He enjoyed hunting when he could and do what he called honey dew jobs around the house, and a member of the Herculamum Masonic Lodge 338. Surviving are his stepson Dennis Vest of Bellville Illinois, two stepdaughters Donna Vest of Festus, Missouri and Darla Vest of Arnold Missouri; four brothers Jeff Davis of Glen Allen, Missouri, Donald Davis of Puxico, Missouri, Charles Davis of Dexter, Missouri, Etsel Davis of Greenfield, Indiana; one sister Thelma Irene of Greenfield, Indiana. A host of relatives and friends also survive. Luther was preceded in death by George Washington Davis and Erma Bell Davis, wife Emma, sisters Wanda Brunner, Gloretta McGee, Christine Davis, four brothers Joe, Walter, Marion and Eugene Davis. Visitation will be held on Wednesday May 12, 2021 from 10 to 11 a.m. at Watkins and Sons Funeral Home in Dexter. Funeral Services will be held on Wednesday May 12, 2021 at 11:00 a.m. with Pastor Greg Booher of Festus, Missouri officiating. Interment will follow in Hagy Cemetery in Dexter, Missouri with Watkins and Sons Funeral Service in charge of arrangements. Online condolences may be sent to the family at www.watkinsfuneralhome.com Watkins and Sons Funeral Service info@watkinsfuneralhome.com or phone 573 624 3548
To order memorial trees or send flowers to the family in memory of Luther F. Davis, please visit our flower store.