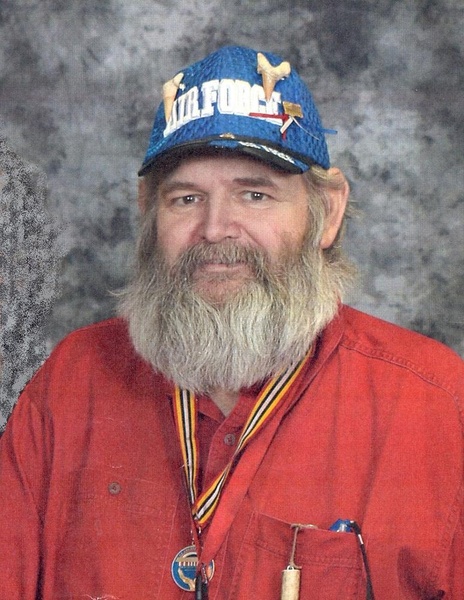 David Edward Hunsaker, the son of the late Rev. John David Hunsaker and Mildred Irene Hunsaker, was born in Dexter, Missouri on the 19th of June, 1954 and entered eternal life in his home, surrounded by family, on the 29th of May, 2017 at the age of 62 years 11 months and 10 days.  David had lived in the Dexter and Bloomfield communities all his life.  He was an aircraft mechanic for the United States Air Force from July of 1972 to May of 1974.  He was employed by Arvin Automotive for twenty-four and one half years as a welder and millwright. He was an avid fisherman, hunter, and outdoorsman.  He was an artist who enjoyed carving, painting, and playing the dulcimer.  He was a history enthusiast, storyteller, and blacksmith who loved attending black powder rendezvous.  He was truly a Jack-of-all-Trades who loved his grandchildren dearly.  On the 2nd of January, 1976, he was united in marriage to Patty Eakes and to this union two children were born.  Surviving are his wife, Patty Hunsaker of Avert, Missouri; one son, Benjamin Hunsaker (Dusty Erickson) of Raytown, Missouri; one daughter, Olivia Price (Matthew Price) of Ellsinore, Missouri; five grandchildren Abigail, Elias, Gideon, Moriah, and Ezra Price; two sisters Joyce Williams (Ralph) of Campbell, Missouri and Janice Williamson (Mike) of Sedgwick, Kansas; many nieces and nephews; and other family and friends who mourn his passing.  He was preceded in death by his parents, one sister Barbara Cahow, and nephew John Cahow.  Friends may call at the Watkins and Sons Funeral Home in Dexter after 5:00 p.m. on Thursday, the 1st day of June.  Funeral services will be held Friday the 2nd of June at 11:00 a.m. at the Watkins and Sons Chapel in Dexter with Rev. Steve Tippen of Bloomfield officiating.  Internment will be in the Dexter City Cemetery with Watkins & Sons Funeral Service in charge of arrangements.

To order memorial trees or send flowers to the family in memory of David Edward Hunsaker, please visit our flower store.