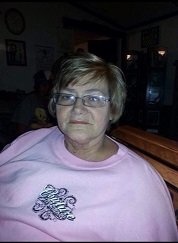 Doris Price of Bloomfield, daughter of the late John Wilson and Beatrice Scott Hagy Sr., was born in St. Louis, Missouri on October 9, 1953, passed away at her home in Bloomfield on February 4, 2019, at the age of 65 years, 3 months and 26 days.

Doris had lived in Dudley and Dexter most of her life before moving to Bloomfield three years ago. She was member of the of the Bible Tabernacle Church in Bloomfield and had worked as a CNA for Caring Hearts In Home Care. She enjoyed going to yard sales and spoiling her grandchildren.

On August 29, 1999, she married Eugene Price in Bloomfield Missouri.

Visitation will be held on Wednesday, February 6, 2019, from 10:00 am to 12:00 pm at the Watkins & Sons Funeral Home in Dexter with Earl Hagy of St. Louis and David Wilson of Bloomfield officiating.

Interment will follow in the Hagy Cemetery in Dexter with Watkins & Sons Funeral Service of Dexter in charge of arrangements.

To order memorial trees or send flowers to the family in memory of Doris Price, please visit our flower store.