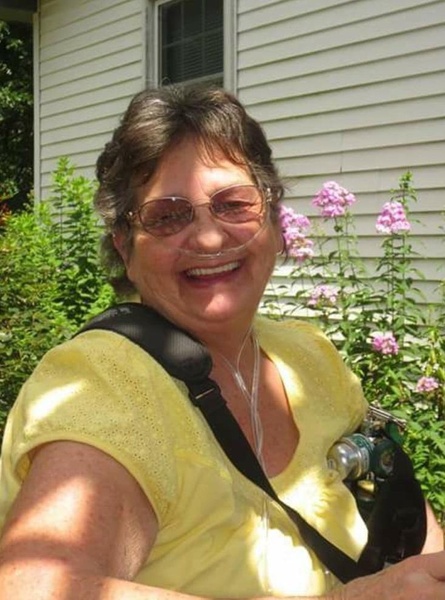 Edna Fay Scheible of Bloomfield, daughter of the late Ezra and Wilburn Smothers Sides, born in Dexter, Missouri on February 22, 1949, passed away at the Southeast Health Center of Stoddard County in Dexter on April 16, 2017, at the age of 68 years, 1 month and 25 days. Edna had lived in Bloomfield and surrounding area all of her life. She had worked as the Pike Township Collector and enjoyed gardening, fishing, bird watching and crochet. On February 18, 1964, she married Eulish Eugene “Bud” Scheible. He preceded her in death on February 1, 2008. Surviving are one son & wife, Buddy & Deanna Scheible of Bloomfield; two daughters & husbands, Teresa & David Kight, Lisa & David Maddox all of Bell City; five grandchildren, Brooke Clary, Austin Kight & Cody Kight all of Bell City, Ethen Maddox of Oran, Blaine Scheible of Bloomfield; two great grandchildren, Cheyenne and Ava Kight both of Bell City; one brother, Ezra Wayne Sides of Roodhouse, Illinois; three sisters, Jenny Jennings of Bell City, Sue McMichaels of Marcelles, Illinois and Kathy Ehlers of Illinois. Other relatives and friends also survive. She was preceded in death by four brothers and three sisters. Visitation will be held on Tuesday, April 18, 2017 from 5:00 to 8:00 p.m. at the Chiles-Cooper Funeral Home in Bloomfield. Funeral services will be held on Wednesday, April 19, 2017, at 11:00 a.m. at the Chiles-Cooper Funeral Home in Bloomfield. Interment will follow in the Oak Ridge Cemetery near Bloomfield with Chiles-Cooper Funeral Home of Bloomfield in charge of arrangements.
To order memorial trees or send flowers to the family in memory of Edna Fay Scheible, please visit our flower store.