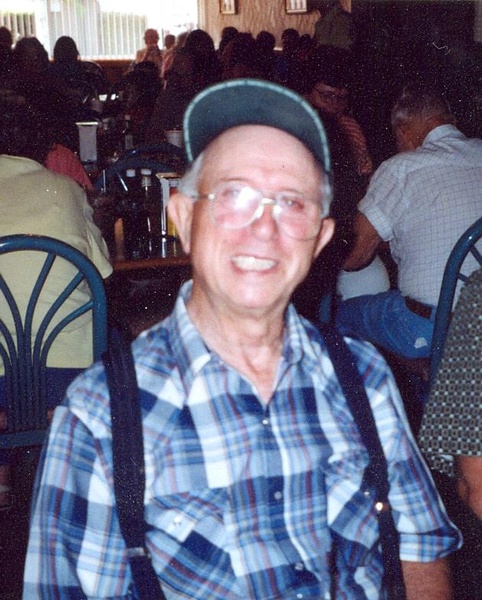 JW "John" Hughes of Morehouse, son of the late Will and Rhodia Stroud Hughes, was born in Sikeston, Missouri on May 24, 1931, and passed away at the Clearview Nursing Center in Sikeston on October 15, 2016, at the age of 85 years, 4 months and 21 days. John had lived in Morehouse most of his life. He had worked as a fork lift operator for the Himmleberger-Harrison factory in Morehouse and was of the Pentecostal faith. On August 16, 1949, he was married to Martha Nell Irene Hensley in Piggott, Arkansas. She preceded him in death on September 11, 2013. Surviving are three daughters and husbands; Angela & Tom Graham, Margie & Charles Ruedrich all of Sikeston, Rhodia & Troy Fiddler of Lexington, Tennessee; two sons and wives; Paul & Lisa Hughes of Sikeston, Russell & Patsy Hughes of Puxico; nineteen grandchildren; twenty-five great grandchildren; seven great great grandchildren; one brother, Joe Hughes of Morehouse; and one sister, Leone Merriman of Fisk. Other relatives and many friends also survive. In addition to his parents he was preceded in death by one son, John William Hughes, and two sisters. Friends may call on Monday, October 17, 2016, from 11:00 a.m. to 1:00 p.m. at the Watkins & Sons Funeral Home in Dexter, Missouri. Funeral services will be held on Monday, October 17, 2016 at 1:00 p.m. at the Watkins & Sons Chapel in Dexter, Missouri with Rev. John Ruedrich of Scott City, Missouri officiating. Interment will follow in the Matthews City Cemetery in Matthews, Missouri with Watkins & Sons Funeral Service of Dexter, Missouri is in charge of arrangements.
To order memorial trees or send flowers to the family in memory of JW "John" Hughes, please visit our flower store.