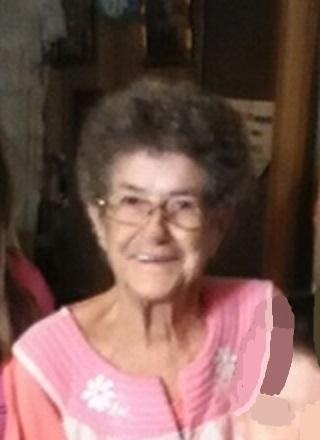 Norma Isaac, daughter of the late Horace and Dova Cato Crites, was born in Greenbrier, Missouri on February 13, 1933, and passed away at her home near Puxico, Missouri on June 1, 2016, at the age of 83 years, 3 months and 19 days. Mrs. Isaac had lived in the Puxico area all of her life. She was a member of the Kinder Chapel General Baptist Church near Puxico. She had worked as a cook at the Puxico Public Schools and enjoyed gardening, dogs, birds and cats. On September 7, 1952, she married Albert Isaac in Piggott, Arkansas. He preceded her in death on March 20, 2003. Surviving are one son, Larry Isaac of Matthews, two daughters & husbands, Marjorie & Danny Robinson of Advance, Andra and Terry Hawkins of Zalma; ten grandchildren, April, Andrew, Tara, Kimberly, Jason, Jennifer, Adam, Jody, Alex and Dana; 18 grandchildren, Scotty, Madyson, Kendra, Kayla, Drew, Alex, Austin, Cheyann, Dalton, Kolton, Nocholas, Austin, Bryant, Jace, Taylor, Joshua, Bradley, and Destiny; one great great grandchild, Piper; one sister, Emma Nevada Price of St. Louis; special daughter-in-law, Glenda Isaac Rush; and special care giver, Carmen Trout. Other relatives and many friends also survive. She was preceded in death by one son, Ronnie Isaac. Friends may call on Friday, June 3, 2016, from 5:00 to 8:00 p.m. at the Watkins & Sons Funeral Home in Puxico, Missouri. Funeral services will be held on Saturday, June 4, 2016 at 11:00 a.m. at the Watkins & Sons Chapel in Puxico, Missouri with Rev. Ray Placher of Puxico and Rev. Elijah Allen of Marble Hill officiating. Interment will follow in the Fagan Cemetery near Puxico, Missouri with Watkins & Sons Funeral Service of Puxico, Missouri in charge of arrangements.
To order memorial trees or send flowers to the family in memory of Norma Isaac, please visit our flower store.