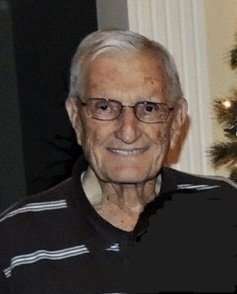 Norman Capps, the son of the late Clarence Norman and Cora Belle Aslin Capps, was born near Bloomfield, Missouri on December 14, 1923, and passed away at The Arbors at Victorian Place in Washington, Missouri on March 28, 2018, at the age of 94 years, 3 months and 14 days.

He had lived in Dexter for many years, he moved to Poplar Bluff in 2004 and had moved to Washington about four years ago. He was a member of the St. Francis Borgia Catholic Church in Washington, Missouri. He retired as an inspector with the Missouri Department of Agriculture, Weights and Measures Division. He was a veteran of the U. S. Army and was a member of the V.F.W. He had served on the Liberty Township Board for many, many years and served as the township clerk.

Funeral Mass will be held at 10:00 a.m. on Monday, April 2, 2018, at the Sacred Heart Catholic Church in Dexter with the Rev. William Hennecke of Dexter, Missouri officiating.

Interment will follow in the Missouri Veteran’s Cemetery in Bloomfield, Missouri with Watkins & Sons Funeral Service of Dexter, Missouri in charge of arrangements.

Memorials may be made to the Missouri Veteran's Cemetery, 17357 Stars and Stripes Way, Bloomfield, MO 63825

To order memorial trees or send flowers to the family in memory of Norman Capps, please visit our flower store.