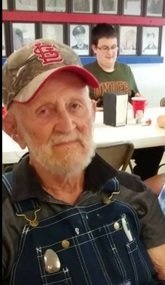 James Norman Walker formerly of Advance, son of the late Henry and Jewell Walker Cagle, was born in Bloomfield on April, 13, 1927, and passed away at the Missouri Veteran's Home in Cape Girardeau on January 30, 2019, at the age of 91 years, 9 months and 17 days.

James had lived in the Advance area most of his life where he had farmed.

Surviving are two daughters, Norma Helbling of Pocatello, Idaho, Edith Back of Reed Springs, Missouri; one son, James Walker of Advance, Missouri; five grandchildren; one great grandchild; four brothers, Gene Cagle of Dexter, Bill Cagle of Poplar Bluff, Wayne and Junior Cagle both of Bloomfield. Other relatives and friends also survive. He was preceded in death by one great grandson, Carter Thomas Walker.

Funeral services will be held on Friday, February 1, 2019 at 12:00 pm at the Chiles-Cooper Funeral Home in Bloomfield.

Interment will follow in the Missouri Veteran's Cemetery in Bloomfield with full military honors. Chiles-Cooper Funeral Home of Bloomfield in charge of arrangements.

To order memorial trees or send flowers to the family in memory of Norman Walker, please visit our flower store.