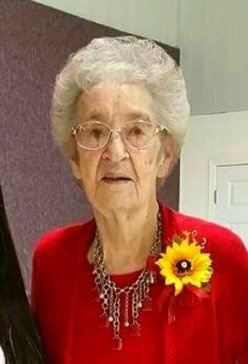 Ruby had lived in St. Louis for 20 years and the McGee and Puxico, Missouri areas the rest of her life. She was a member of the First General Baptist Church in Puxico. She enjoyed Crochet, Quilting, Embroidery, Cooking for her family and taking care of her husband.

Funeral services will be held on Wednesday, April 25, 2018, at 11:00 a.m. at the First General Baptist Church in Puxico, Missouri with the Rev. Kenneth Lambert of Bloomfield, officiating; Rev. Steve Jones of Puxico and Rev. Phil Warren of St. Ann assisting.

Interment will follow at the Puxico Cemetery in Puxico, Missouri with Watkins & Sons Funeral Service of Puxico in charge of arrangements.

To order memorial trees or send flowers to the family in memory of Ruby Florence Barks, please visit our flower store.