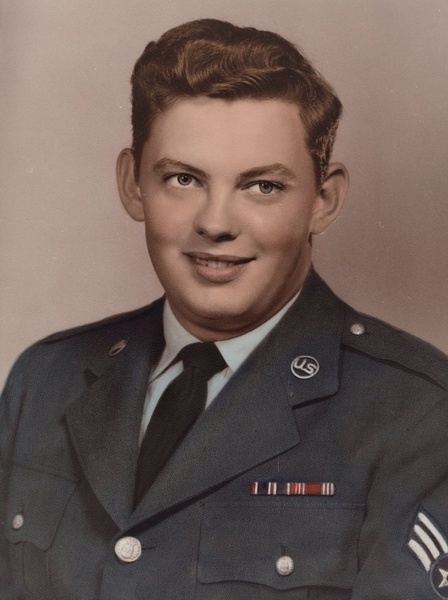 Terry married Marcella Sue Fish on June 6, 1959. Over the course of the next 60 years they traveled extensively, visiting all 50 states—living in 10—as well as living in the countries of Turkey and Greenland.

Terry went to Kinder School and graduated from Puxico High School in 1957. He joined the Air Force shortly after graduation and became an Air Traffic Controller. After a 20-year Air Force career, he retired as a Master Air Traffic Controller. Following his retirement from the Air Force, Terry became a Flight Service Controller for the Federal Aviation Administration (FAA). While working at the Cape Girardeau Airport he attended SEMO University obtaining three years of credit toward a degree in teaching.

Through all their travels "home" was always the Puxico area, so Terry and Marcella moved back after retiring from the FAA. Terry was awarded numerous military citations, awards and letters of appreciation from the pilots he directed. He was a member of the Air Communicators & Air Traffic Controllers Association.

Surviving Terry are his wife Marcella Townsend of Zalma, daughter Lynnette (and Kent)Whitsel of Jackson, MO, son Michael (and Marla) Townsend of Puxico, MO, and daughter Jannette (and Steven) Lootens of Middle Grove, NY; five grandchildren, Jesse (and Joslyn) Townsend, Justin (and Jeannette) Townsend, Zachary (and Melissa) Whitsel, Daniel Lootens, and Amanda Lootens; and one great grandchild, Grayson Townsend. Terry is survived by his brother Bill (and Pat) Townsend of Bowling Green, KY and numerous other family members. Terry was preceded by his parents, and sister, Bonnie (and Bob) Hisaw.

As an expression of sympathy, memorial contributions may be made to Fagan Cemetery, Brush Creek Cemetery, or Brown Cemetery in Terry’s memory. Terry was a member of Brush Creek Baptist Church.

Graveside funeral services with internment to follow will be held at 2:00 PM, August 20, 2019, at the Missouri State Veteran’s Cemetery in Bloomfield, MO with the Rev Ray Placher of Puxico, MO officiating.

To order memorial trees or send flowers to the family in memory of Terry Wayne Townsend, please visit our flower store.