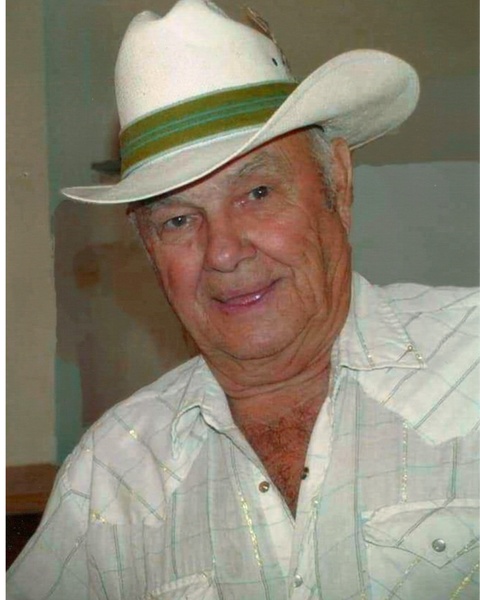 TJ Sanders of Bloomfield, Missouri the son of the late Benjamin and Eva Mae (Shumpert) Sanders was born in Parma, Missouri on December 3, 1933, and passed away on October 8, 2022,  at the age of 88 years.
In 1953, he was married to Edna Carver in Lutesville, Missouri.
TJ has lived in the Bloomfield area since 1992, when he retired from carpentry work.
TJ was a Union Carpenter for thirty years, loved Square Dancing, Horseback Riding, Gardening (mainly vegetables), Hunting Deer and Squirrell, and spending time with Family. TJ enjoyed Pepsi, Coke and especially enjoyed Milk. TJ always kept wood for the winter for his in-laws, Loved lending a hand to those in need and was always a good neighbor.
TJ is survived by his wife of 69 years, one son, Terry Joe (Deborah) Sanders of Bloomfield; two daughters, Charlotte Elaine (Clarence) Boen of Bloomfield, Missouri; Lena Kay (Bert) Hindman of St. Peters, Missouri; one brother, Charles Sanders of Cape Girardeau, Missouri; six grandchildren, thirteen great-grandchildren and one great-great-grandchild; one daughter-in-law, Cindy Ball Sanders; and TJ was a Mentor to his great nephew, Robert Chaney.  A host of Family and Friends also survive.
He was preceded in death by his parents; one son, Larry Jean Sanders;  one brother, James Sanders; and three sisters, Katherine Baker, Beatrice Zuck, Sharon Sanders.
Visitation will be on Thursday, October 13, 2022 from 10:00 A.M.  to 12:00 Noon at the Watkins and Sons Chapel in Bloomfield, Missouri.
Funeral services will be held the same day as visitation at 12:00 Noon at the Watkins and Sons Chapel in Bloomfield with Terry Sanders of Bloomfield officiating and  Watkins and Sons Funeral Service of Dexter, Missouri in charge of arrangements.
Interment will follow at McGee Cemetery in McGee, Missouri, with Watkins and Sons Funeral Home of Dexter in charge of all arrangements.
Watkins and Sons Funeral Service
info@watkinsfuneralhome.com or phone 573-624-3548

To order memorial trees or send flowers to the family in memory of TJ Sanders, please visit our flower store.