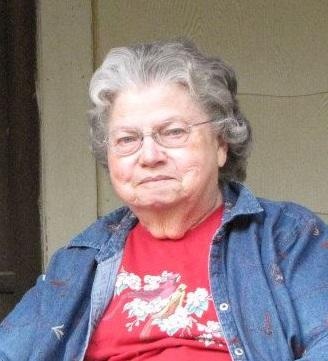 Virgie "June" Culbertson of Bloomfield, daughter of the late Lou David & Ada Harris Jarrell, was born in Dexter, Missouri on February 28, 1936, and passed away at Barnes-Jewish Hospital in St. Louis, Missouri on December 12, 2016, at the age of 80 years, 9 months and 14 days. She had grown up in Missouri. She had lived in Dexter and Bloomfield all of her life. She was a member of the Hill General Baptist Church near Bloomfield and enjoyed sewing. On December 9, 1966, she was married to James Ray Culbertson in Bloomfield, Missouri. Surviving are her husband, Ray Culbertson of Bloomfield; one son, Jim Culbertson of Bloomfield; one daughter, Cindy Griffin of Bloomfield; six grandchildren; one brother, Dwight Jarrell of Bloomfield; and one sister, Louise Losh of Strafford, Missouri. Other relatives and friends also survive. She was preceded in death by four brothers and four sisters. Visitations will be held Wednesday, December 14, 2016, from 5:00 to 8:00 p.m. at Watkins & Sons Funeral Service, Inc. in Dexter. Funeral services will be held on Thursday, December 15, 2016, at 10:00 a.m. at the Watkins & Sons Chapel in Dexter with Rev. Steve Tippen of Bloomfield officiating Interment will follow in the Hill Cemetery near Bloomfield with Watkins & Sons Funeral Service of Dexter in charge of arrangements.
To order memorial trees or send flowers to the family in memory of Virgie "June" Culbertson, please visit our flower store.